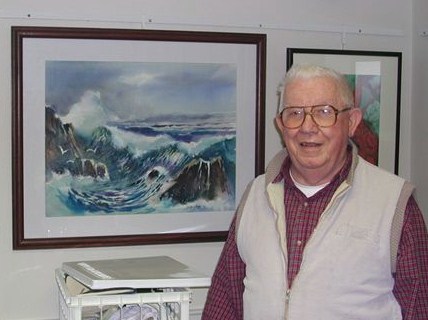 DANIEL M. HINES
27 July 1927-10 February 2011
Dan Hines was born in Philadelphia and lived in Medford, New Jersey from 1965-2011. Upon retirement in 1986, after a long career in commercial art, Dan turned to the Fine Arts, especially watercolor painting. The first watercolors Dan entered in competition were met with praise and encouragement from the judges.  He won many awards in various shows including, the Wings and Water Festival, the Avalon Art Show, the Burlington County Art Guild show at Smithville (including Best of Show at the 1994 exhibit), and the South Jersey Center for the Arts. Exhibitions of his works have been held at the Pavilion Gallery at Memorial Hospital of Burlington County, the Philadelphia Country Club, Gloria Dei Church and the Gallery at Medford Leas.  In 1995 he won the purchase awards from both the Camden County Cultural and Heritage Commission and the Burlington County Heritage Commission shows. His favorite subjects were marine scenes and landscapes.